It’s back! And it’s got Snake!

If you’re old enough to know that those words refer to the Nokia 3310, then you’re the target for the year’s biggest retro-tech story so far.

The relaunch of the Nokia 3310 is the latest tech product to dust off its form factor and reprise its former glory by appealing to those of us who are nostalgic for the toddler years of mobile communication. The Nokia 3310 is a small, colourful and perfectly formed little comfort blanket, thrown from a simpler time into the hands of a generation that’s staring into the future with trepidation and a little boredom. 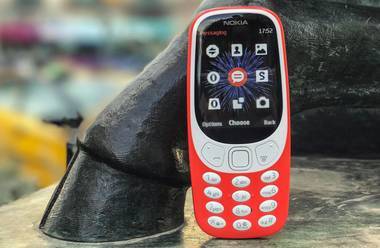 Yes, I do declare the smartphone market has officially become boring, and the Nokia 3310 has a load more personality than anything else out there. It has what my agency refers to as ‘brand charisma’. Like the Polaroid Socialmatic, it’s a glorious anachronism – an anomaly in a universe of ultra-high-def-touch-screen-predictive-algorythmic-connected-glossy-shiny-titanium-tech which is all becoming a bit… meh. If you’re choosing your next smartphone, it’s increasingly likely to be a decision made on features, rather than on pure emotion. Smartphones have become like a flock of pigeons – grey, anonymous and boring. The Nokia 3310 is a peacock.

Is it here to stay though? I doubt it. It’s a postcard from the past; a novelty from nostalgia-land. We want brands that speak to the past and the future in a single breath. We want them to be both authentic and progressive. Kodak (yes, they’re still going) launched a smartphone last year (yes, a smartphone) and it’s gorgeous. It builds on the brand’s heritage in photography, appeals to our nostalgia for capturing those magical Kodak moments, and does it with a beautiful, differentiated product. A high-tech camera-phone in a low-tech leather case. What’s not to love?

In short, we love the convenience that progress affords us, but we also miss the visceral reassurance of the analogue world. And we are drawn to brands that have charisma and distinctiveness. Those are both qualities that are acutely lacking in this category.

PS, if you want to perve at a gallery of old Nokia phones, you might enjoy spending ten minutes in this article, then declaring your age by identifying your first phone within earshot of people younger than you.